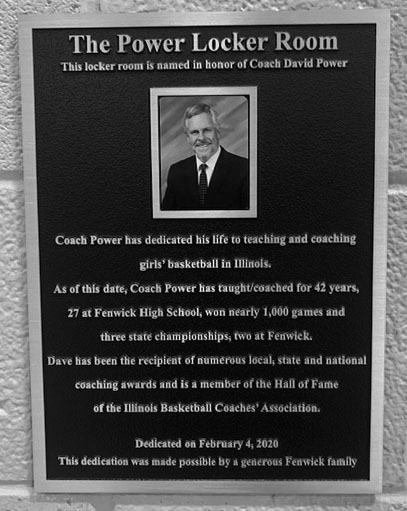 Prior to the dedication, athletic director Scott Thies reminisced about some of his fondest memories of Coach Power over the years. These memories spanned Mr. Thies’ experiences watching Coach Power from afar while he was in middle school, cheering him on from the stands as a Fenwick student and working alongside of him as an athletic director and co-worker.

Mr. Thies’ speech brought tears to Coach Power’s eyes. According to Coach Power, “The spotlight is really on the girls, they’re the ones who made the program what it is…all the wonderful players we had.”

Coach Power added, “The spotlight shined too bright on me, when in reality, look at all those great coaches I’ve surrounded myself with.”

The game itself played out in the most surprising and unexpected way. The Lady Friars were playing an Evanston team that had been ranked first or second in the state all year long, and that had won the Montini Christmas tournament.

The game was back-and-forth, and with four minutes remaining, it looked like the Friars were going to win. Then, with four seconds left in the game, Evanston was winning by one single point and had one last free-throw. After Evanston missed the free-throw, Fenwick sophomore Elise Heneghan got the rebound, dribbled it up the court, and at about halfway there, she stopped and shot a jaw-dropping last shot. About fifty feet away, the shot banked off the backboard and into the net, leading Fenwick to a victory.

After the eventful night and game, Coach Power commented, “The dedication… it was very special, and the evening was very special.” When asked what it all meant to him, Coach Power responded, “A recognition of all these wonderful players that came back on their own time to be there for it.”