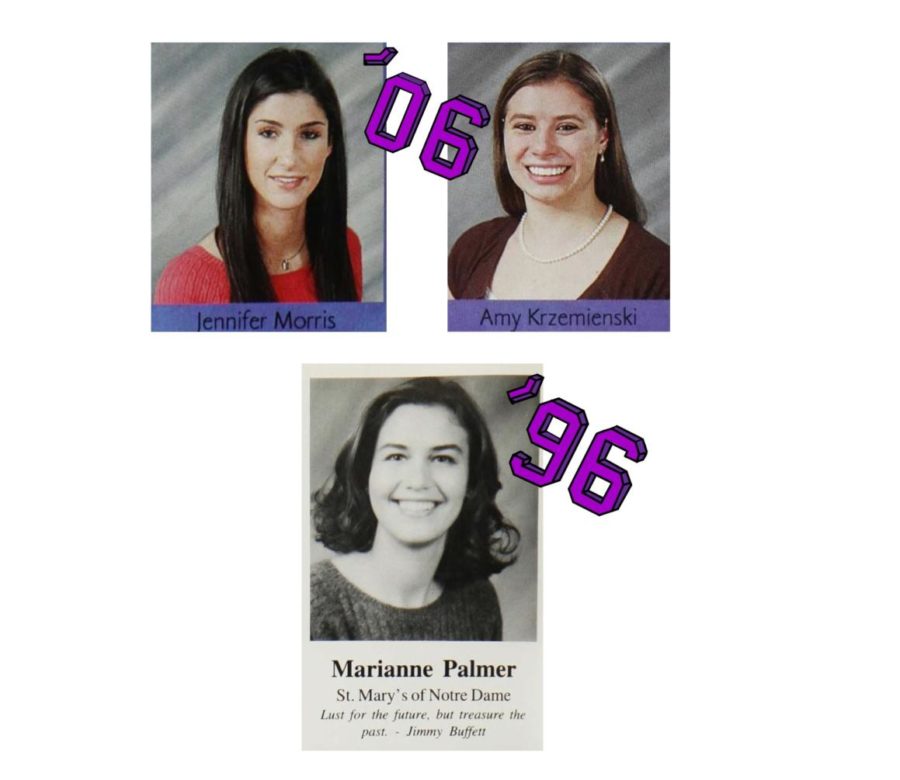 From the moment we step foot into the hallowed halls of Fenwick, we hear rumors of that elusive “Fenwick moment” — that one Friar memory that unmistakably defines high school. For some students, pinpointing this experience is easy, as they fondly remember a single class, an inspiring teacher, a thrilling game, an exhilarating performance, or a successful competition. For others, this moment represents a brave new path forged, or a courageous decision taken. Indeed, for the women who graduated in Fenwick’s first co-educational class, this Fenwick moment was a groundbreaking step forward which paved the way for so many of us who dared to dream of our own Fenwick moments.

Currently, Fenwick’s faculty boasts three such female Fenwick alumnae, from the Class of 1996: Samantha Carraher, Marianne Carrozza, and Brigid Esposito. In total, the fourteen female Fenwick alumnae currently on staff span all academic departments, from areas as diverse as Computer Science and Physics to English and Theology, to Psychology and World Languages. Fenwick’s administration also proudly includes Friar alumnae as an assistant principal, a Learning Resource Coordinator and a college counselor. They lead countless extracurricular activities and sports from Spanish Club to The Wick and yearbook, from WYSE to Women’s STEAM Coalition, from Girls’ Swimming and Water Polo to Volleyball and Tennis. Indeed, there are few aspects of Fenwick that have not been touched by these incredible role models.

Yet, when asked about their contributions to Fenwick, these teachers are as consistent in their modesty about their own contributions, as they are proud of their alma mater. While contemplating her experience in Fenwick’s first co-ed class, Mrs. Carrozza said that this infamous quote immediately came to mind. Since 1929, Fenwick has taken pride in educating hard-working, talented and driven students, but for over 60 years, the Friars were fundamentally similar in another way: they were all men. In 1992, the first class of female Friars entered the school, irrevocably changing Fenwick’s legacy and traditions. “We absolutely set the tone and example for other female Friars,” said Mrs. Carrozza as she reflected on how the Class of 1996 developed a distinct culture. From choosing the plaid for the Fenwick uniform skirts, to selecting smaller class rings, the women of Fenwick “paved the way for new traditions, not only through material items, but also by showing others we belonged at Fenwick,” she continued. Ten years later, the Class of 2006 continued to establish that female Friars were just as capable in academics and sports. As Mrs. Ori said, “We had to find our own identity, what a female Friar would look like. And we did so by competing with and sometimes exceeding the efforts and abilities of the boys.” The male students at Fenwick have always had an intrinsic brotherhood, as their connected ancestry from fathers and grandfathers often runs through the many pictures and trophies that adorn Fenwick’s halls. Such sisterhoods between the female Friars have thrived and indeed been made possible because of the bravery and excellence of these amazing women.

For Biology teacher and Women’s STEAM Coalition Moderator, Mrs. Christophell ‘06, this competition between male and female Friars reflects a broader disparity in the scientific community and has become a sort of personal mission. Through the Coalition, she hopes to “help women get a foothold in the Fenwick and scientific communities.” In fact, Mrs. Carrozza says that “making my way in the man’s world of Fenwick taught me how to speak up, be heard, and how to use my voice. It gave me a stronger sense of self confidence I did not know I had.”

When asked about the biggest changes to Fenwick through the years, any Fenwick alumnus would tell you about the physical modifications to the building, the addition of science laboratories, and, of course, the new parking garage. However, these female faculty members also spoke about the plethora of extracurriculars available to Fenwick students today. “I’m jealous, sometimes, because there are so many organizations that I would have loved to have been a part of as a student,” said Mrs. Christophell of the new clubs and activities. Despite all of these changes, the teachers agreed that Fenwick students are fundamentally the same—dedicated, talented, sympathetic, and driven.

When asked about her decision to return to Fenwick as a teacher, Mrs. Ori said that those fundamentals were a major factor in deciding to come home to Fenwick. This perspective perhaps makes the female Fenwick alumnae uniquely suited to guiding future generations of students, for as Mrs. Christophell advises, “You should always be learning,” not just from books but from the many experiences with other people. But, Mrs. Ori remarked that the opportunity to become part of the Fenwick family comes with the responsibility to “Be kind! Be open to meeting and being friends with different kinds of people. Try new things and don’t be afraid if they’re considered ‘cool.’” Ultimately, it is this willingness to immerse oneself in all of what Fenwick offers that makes our school such a diverse, inclusive, and remarkable community.

When I asked each of these fantastic faculty members about their “Fenwick moments,” they instantly paused. After a few moments, and an inevitable smile, they all agreed, “Do I have to choose just one?” Speaking for the Friars who have come after them, perhaps one of the best Fenwick moments for many of the female students has been the opportunity to learn from these incredible women. So, from all of Fenwick’s female Friars, past and present, thank you, Eleanor Cain (’06), Samantha Carraher (’96), Marianne Carrozza (’96), Amy Christophell (’06), Grace David (’08), Brigid Esposito (’96), Cristina Lilek (’05), Igho Oraka (’03), Jennifer Ori (’06), Erin Power (’07), Theresa Steinmeyer (’12), Elizabeth Timmons (’04), Lauren Trifilio (’97), and Kate Whitman (’01). You paved the way and continue to make it possible for future female Friars to realize their own Fenwick dreams and relish their own special moments.