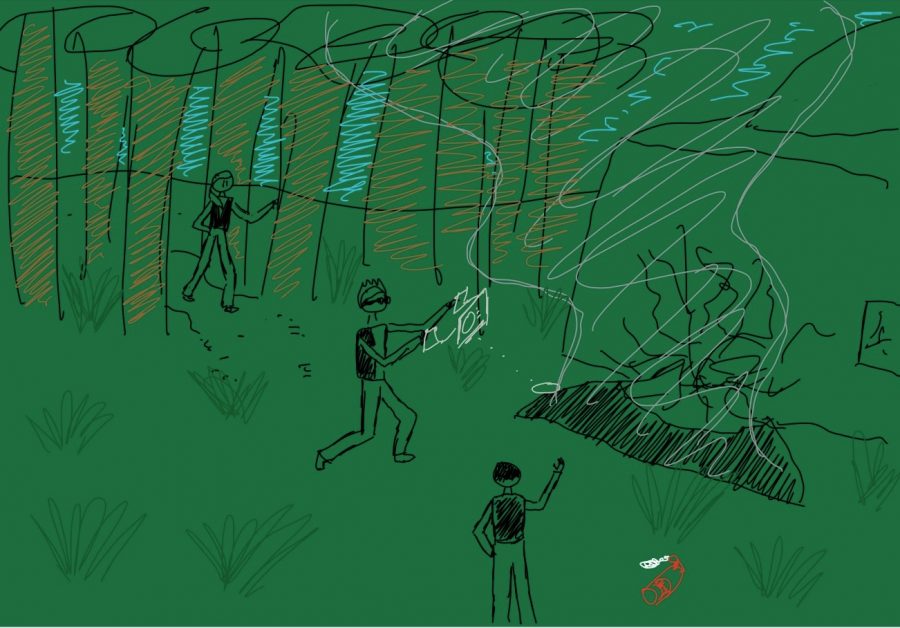 Contrian is a serial science fiction series by Cole Ude ’25. Please click here to read Part I: “Problems and Mysteries.”

Everyone on the team was nervous and jumpy. It had been more than a week since we had learned that some other creature was on Contrian besides us, but these mysterious beings hadn’t damaged anything since they wrecked our Pit. However, today when our mechanic Hal went out to the shed to tune up the drills, he saw a shadowy figure slip away from the equipment. It was too fast for him to get a clear view of, but he was claiming that it was crablike in shape.

The team was not taking it well.

Leah, our radio operator and contact with Earth Command was especially riled up. “You know Earth Command, Hal! They’re going to demand details! I can’t just tell them ‘Oh, Hal said that it was crablike in shape!’”

In addition, even though we hadn’t sustained any damage since the Pit was wrecked, our team had mined practically nothing since we got here. Charlie, the other team leader, had stayed behind when the Revenge I departed for Earth. However, Earth Command still had not been notified of his absence on the spaceship now halfway between Contrian and Earth. He was advising us not to mine until we got to the bottom of this. The symbol we had found etched in the floor of the Pit after it was wrecked was being analyzed by our computers, but they hadn’t been able to tell us anything besides the fact that it was a threat.

I slipped away from the increasing argument to go outside. I knew it wasn’t the smartest thing to do when unidentified creatures with a grudge against the team and me were roaming around, but I needed a breath and nothing struck me as amiss. Also, I wanted to scan the ground near the Pit for some sign of a tunnel. The creatures would have had to have gotten inside the camp to access the maintenance area, but no one had seen anything enter. The Pit was dark, though, with lots of wires and pipes, which could easily cover a tunnel entrance from the outside. I hoped to find the external entrance.

Running a scan on the area told me nothing, but the amount of trees in the area, plus the strange minerals beneath the surface, often scrambled the sensor equipment. A negative scan couldn’t be considered reliable.

It was also possible that these creatures had cloaking equipment.

I began searching for a tunnel entrance, but it wasn’t easy. The abundance of vegetation and rocks made walking difficult, let alone searching. I could attempt to use a mining explosive to clear the area, but I didn’t want to risk burying the tunnel.

If there was one. I had been searching for half an hour and still hadn’t found anything. But then I saw a strange pile of rocks and dirt. It didn’t appear to be natural. I stumbled towards it and began digging, but before I could get very far, the mound collapsed inward into a shaft that dropped straight down. It had been hiding a tunnel.

“Hello?” I shouted into the shaft.

“Doc? Is that you? Where are you?” Amy’s voice resonated back up the hole.

“I found a tunnel outside! Does it lead to the Pit?”

“I guess so.” Amy sounded much closer this time. “I found the entrance behind a curtain of wires.”

I went back inside to see the entrance in the Pit. Charlie came with.

“It’s good that we know about this now,” he said worriedly. “But we need to block this up. If those creatures can get inside the camp anytime they want…well, that’s not ideal.”

“We know that,” Amy replied, “But they haven’t tried anything since they wrecked the Pit and the drills. Surely they’re not that dangerous, or maybe they’ve left?”

I suggested that we tell the rest of the team. We all gathered in the main room, as Amy and I told what we had discovered. Everyone else listened in various states between interested and listless. Once we had finished, Hal spoke up.

“I think now we have enough material to go to Earth Command with. They can begin scanning their databases for creatures that match the description we have of our adversary. Amy and I can block the tunnel, I have a few ideas. And everyone else should get back to mining. I know you think we shouldn’t, Charlie, but we haven’t been confronted since the attack on the Pit, and we’re running far behind. Earth Command is going to want a mineral report soon, and if we say we’ve mined zilch so far…”

Charlie shrugged. “It has been a while since the Pit incident, and we do need to call into Earth Command. If everyone else wants to mine, I’m okay with it.”

We put it to vote, and all eleven of us chose to mine. Amy and Hal went out to prep the drills, and Ken, Leah, and a couple others agreed to stay back and send a message to Earth Command.

Mining on Contrian wasn’t especially difficult, but the vegetation made it arduous to drive and aim the drills. Earth Command had come up with an explosive that only sent out a shockwave in one hemisphere of the blast radius, making it easier to clear the ground without making a huge crater. On the way to the mining site, Hal told us that he intended to use one to collapse the tunnel, but he couldn’t find any except the ones that we were going to use to mine.

“That’s odd,” said Charlie. “We had a full bin when we finished before you came. Maybe it was accidentally loaded on the Revenge I.”

We continued hiking alongside the drill, which was driven by Alexia, one of the mechanics. We had just gotten to the mining site when we heard a rattle and boom back from the direction of the base camp. Various alarmed looks passed among the team. Then before anyone could say anything, I was running back along the path we had cleared. I heard someone else following me. I reached the edge of clearing where the camp was, staring in disbelief.

There was an large half-crater in the ground next to the base camp, smoldering from the explosion. Part of the camp’s wall was crushed in, and the members who had stayed behind were outside, shouting. Ken had a fire extinguisher that appeared to have been used already.

I approached them. “What happened? Was anyone hurt?”

Ken shook his head. “No one was hurt, just a bit of a shock. Apparently the creatures here on Contrian stole a mining explosive and set it off, but knocked it over in the process.” He pointed at the semicircle crater. There was a small fire, but we put it out.”

I heard shouting behind me. “Doc! Ken! Everyone else!” Alexia appeared out of the trees. “Something fell in one of the mineshafts, and we think it was one of the creatures!”

I froze. Did I want to see these creatures that had the knowledge and ability to write, dig, make weapons and comprehend foreign machinery? I found myself following Alexia back into the forest. She pointed at a mineshaft that we had dug a long time ago. It was overgrown with vegetation, which had been crushed in. I made my way over to the hole in the leaves, Charlie right behind me. I peered down.

Five glowing red eyes stared up at me.