Contrian, Part I: Problems and Mysteries 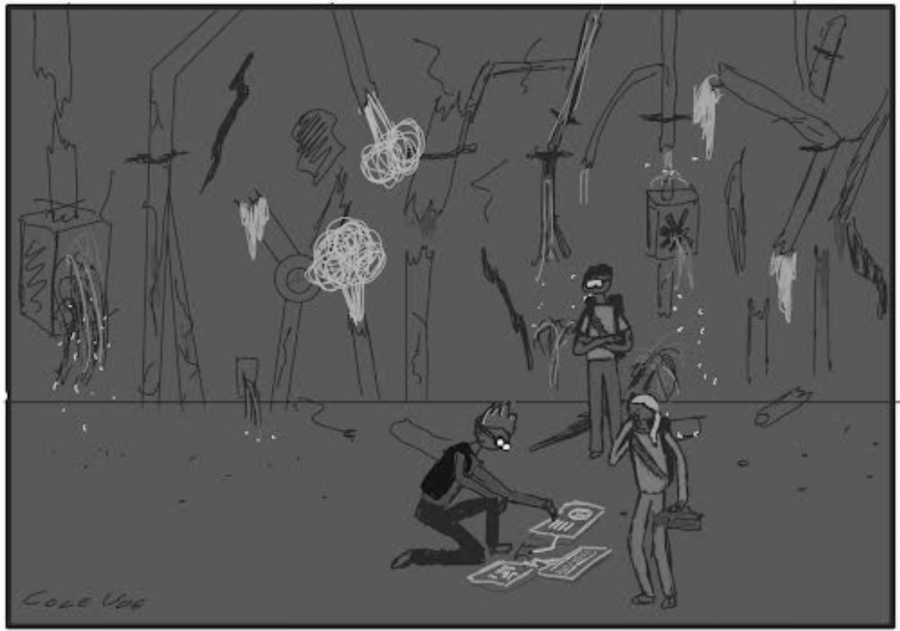 Contrian is a new serial science fiction series by Cole Ude ’25 that will run in The Wick in installments this year. Check back to find out what happens next!

I usually didn’t get the strange names that Earth Command gave the spaceships. For instance, the Revenge II and its counterpart Revenge I were named after an old water ship that once belonged to a pirate named Blackbeard. But no one used water ships anymore, and Earth Command probably didn’t know much about the pirates of long ago. Not that any of us miners did. There were ten people on board the Revenge II, all miners or tech wizards, and we were relieving our teammates down on the asteroid Contrian.

Back home, Earth was in a terrible state. Fuel and clean water were running low, pollution was getting worse by the month, and construction companies were running low on metal and wood. I was the lead on a team of nine other miners who drilled the asteroid world of Contrian for precious metals desperately needed back home. There were two teams, who rotated between Contrian and who was back home.

I looked over at Amy, our spaceship pilot and general tech whiz. She was focused and tense as we entered the atmosphere of Contrian. If the entry was more than a few feet off, the spaceship would have gone up in flames. Amy had been piloting spaceships since she was hired by Earth Command, ten or so years ago. None of us were particularly worried.

Coming within sight of the base camp, we were still coming down at an angle, but after a few seconds Amy pulled up on the steering control and set us gently down on the landing pad.

“Revenge II, please confirm touchdown.” The radio crackled and popped with the message from Earth Command. `

There was a lot of work to be done in the three-hour window before our counterparts left for Earth. We had to see where they had left off, receive further instruction from Earth Command, load any minerals or other items that needed to return to Earth onto the Revenge I, and fix any problems with our counterparts’ spaceship.

The loading of the Revenge I was already beginning as we left our spaceship. However, I was seeing much more damaged equipment than usual, and perhaps consequently, not as many minerals.

I conferred with Charlie, the other team leader. “What happened to all your equipment?”

He shrugged. “Couldn’t tell you. Likely not wear, tear and strain. Things have been breaking down left, right, backwards, and forwards too. The equipment wasn’t the only problem either. Wires were fraying and pipes were cracking in the base camp. We’ve fixed most of those issues, about the only thing we didn’t get to was the HVAC. As a consequence, though, we haven’t been able to mine much. Earth Command…”

“Is not going to be pleased,” I finished. “Did you at least make the quota?”

Charlie nodded grimly. “We made the quota, but just barely. The volume we got this round is less than half of what we normally bring up. These maintenance problems…well, they came at an inconvenient time. Nobody’s getting fired yet, thought, at least this time. You can see the full list of everything that broke inside the camp. But it’s pretty hot in there, the HVAC really needs to be fixed. So make that a priority.” He gave me a lopsided grin and hurried off to inspect the Revenge I.

“What was that all about?” asked Hal, our mechanic.

I turned to give him a sardonic smile. “You’re going to be really busy these next few days. You’ll get to make up for all that boring time aboard the spaceship.”

He raised an eyebrow. “I’d better get started, then.”

Hal walked off to inspect the camp. I looked around, watching as the Revenge I was loaded with broken equipment, then went to help unpack some of the things that our team had brought.

Ken, our systems monitoring specialist and half-decent chef was already in the Revenge II, getting various ingredients from the storage boxes stacked back there.

“Don’t mind me. Just getting some things to make,” he said, putting a freeze-dried packet of fruit in his pocket.

I nodded. “The two-week long rocket flight sure makes a person hungry. Better get cooking.”

He tossed me a thumbs-up and left the cargo area. I grabbed the bin of personal items that everyone had brought from Earth and followed him. As soon as I stepped inside the camp, I became aware of the unnatural level of humidity and sweltering heat. Dropping the bin I was carrying down by the entrance, I went to find Hal. I figured he would be down in the Pit.

The Pit was the maintenance center of the camp. Buried below Contrian’s surface, it could only be accessed from inside the settlement. The ladder-like stairs to access it were difficult to descend, but at least it was cooler down there.

Confirming my suspicion, Hal was already down in the pit, shining a flashlight around. Alexia, our other mechanic, was there as well, carrying a box of spare parts and tools.

“Can you tell what went wrong?” Alexia asked. “A lot of these pipes are cracked, more than usual.”

Hal shook his head. “As you said, the pipes are cracked, but there’s no sign as to what happened. Most likely being exposed to the cold for two and a half years has taken its toll on the pipes.”

I walked a little closer to the two of them, leaning forward to see the crack for myself. It was wide and long, almost like someone had scored it with some sort of serrated saw.

I turned to Hal. “Didn’t you two replace these last year? Remember? It was right before we left.”

A curious look came onto his face. “That’s right, Alexia and I did replace these last year. And it was right before we left. They shouldn’t have cracked yet…well, we need to replace them regardless.”

I left them to their work, and by the time I got back upstairs, cool air was starting to flow from the vents. Our mechanics were very talented.

As I went to inspect the equipment, I ran into Amy.

“I just got back from the drill shed,” she said, breathless, “and almost all the drills have huge cracks in them. I have no clue what the last team was doing, but based on the look of the drills, they were throwing the equipment off a cliff!”

She nodded. “It’s really bad, though.”

She wasn’t kidding. The drills were chipped and scratched, wires snapped, and pipes cracked. I examined the marks. The scratches on the drill appeared to have been made with a long, serrated blade. But with all the work that we did on the drills and the high amount of sharp tools lying about, a few scratches weren’t uncommon. However, this amount of destruction, in addition to the damaged wires and pipes, was slightly suspicious.

“Do you have any idea what caused this?” I asked, running my finger through a crack in a pipe.

Amy shook her head. “Based on the look of it, it seems like they drove the drills through a forest of knives, but that can’t be it.”

“Weird,” said Hal, coming out into the shed. “These scratches look a lot like the ones in the Pit.” Something flashed across his face. Fear, maybe? Anger? “Do you think this was deliberate?”

“No way,” I said. “It’s the other team’s base too. And there are no other beings here on this planet.”

Both Amy and Hal looked relieved. I was feeling slightly nervous. True, the other team wouldn’t wreck the equipment that we shared, and we hadn’t made contact with any life on Contrian yet. There was always a possibility that there might be someone else on the asteroid.

I spent a little bit of time helping Hal and Amy patch up the drills, but when I looked at my watch, I realized that the Revenge I would be leaving in 15 minutes. I hurried to catch up with Charlie before it left, just to make sure there was nothing we missed.

When I got there, I couldn’t find him.

“Are you looking for Charlie?” asked Mary, a miner on the other team.

I nodded. “Just wanted to see if we missed anything.”

She pointed towards the camp. “He went to make sure all of our stuff was packed, so that we didn’t leave anything behind.”

I ran to the settlement. It seemed kind of hot even though the HVAC was running. I looked around for Charlie, but I couldn’t find him.

“Charlie? Are you here?”

We descended into the Pit, where Hal and Alexia were standing with a flashlight, pale faced.

“Look-” choked out Hal, shining a flashlight at the pipes they had repaired just hours before.

The pipes were completely shattered, little metal pieces all over the floor. Looking around the pit, I saw additional wires that had been unmistakably cut and equipment with those serrated scratches in it.

As I knelt to examine a symbol etched in the floor, the cause of this damage suddenly became glaringly obvious.

Contrian was not as uninhabited as we thought.