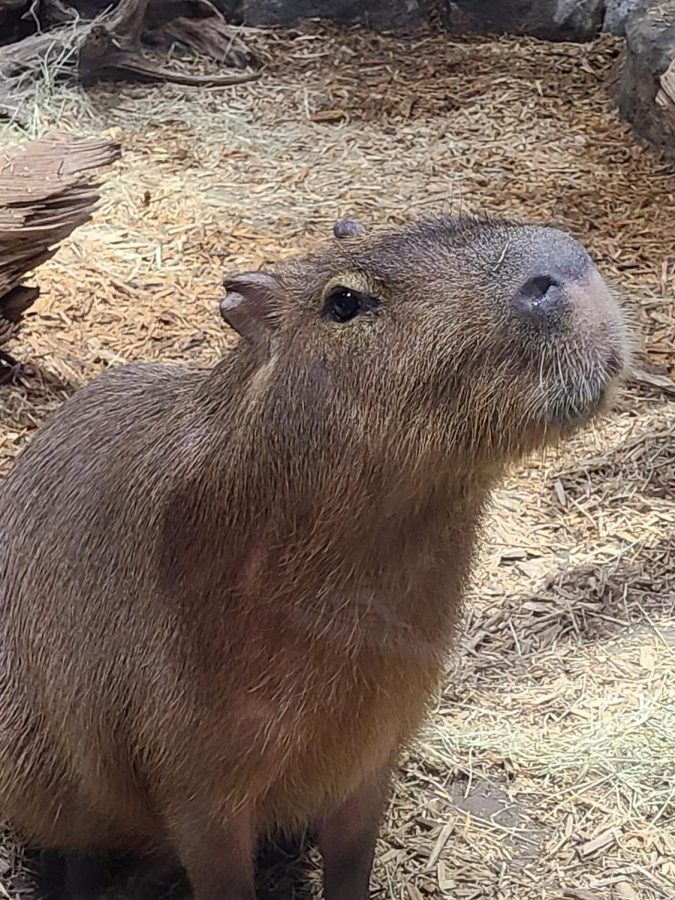 From the misty, rippled waters of an orange-infused bath erupts an elusive creature—one that carries the demeanor of a self-possessed swan, yet the body of a magnified rodent: the capybara.

Capybaras, scientifically known as the Hydrochaeris hydrochaeris, H. isthmus, can be found grazing the marshy flatland that exists east of the Andes Mountains, a mountainous range along the southwestern border of South America. Relying on water to sustain their comfortable lifestyle, their diet consists of consuming various water plants and copious amounts of water. However, they don’t solely rely on water for nutrition, as they evade their predators through a technique in which they hide deep underwater for extended periods of time. Their aquatic aptitude is largely influenced by their environmental surroundings; entrapped by the rugged Andes Mountains, capybaras are forced to adapt to the rivers and marshes of South America. Ms. Shana Wang, English and Mandarin teacher, shares her knowledge of capybara behavior: “They are huge, but very cute, rodents. I have never seen one at a zoo, only in videos. But apparently they travel in herds, unlike some other rodents.”

Recently, capybaras have made a prominent appearance within the media, cementing their impassive composure into the minds of people globally. A spike in searches containing the word “capybara” in the past year poses the possibility that the media has contributed substantially to the notoriety of such animals. Molly Weber ‘23 comments on the internet’s interest in capybaras: “First off, capybaras are just really funny looking animals. They’re actually rodents, so they’re sort of related to rats. They have very stoic faces that make them look like they just made a joke and are waiting for people to laugh, or they look like they’re going to explode with rage. And I think the media, especially Instagram, plays such a big role in capybaras’ fame. I see memes about them basically everywhere about everything!”

The elusiveness that pervades a capybara’s presence doesn’t necessarily stem from its intrinsic qualities but rather from the internet’s glorification of such creatures—What makes the capybara different from other rodents? What makes it trendy?

Well, a capybara’s size, relative to other rodents, is significantly larger. Being dubbed “The World’s Largest Rodent,” capybaras’ height ranges from 20”-24,” and their body length ranges from 42”-53.” Furthermore, the stigmatization of rodents as “dirty” or “diseased” has contributed greatly to how people perceive animals like rats or moles. Witnessing the internet’s vast appreciation towards a rodent is contrary to the usual distaste held for them. Tristen Halstead ‘23 describes her experience with other rodents in comparison to capybaras: “I used to own two guinea pigs and I definitely see them in every capybara. In many ways, guinea pigs are mini capybaras. They are related to rodents and show many of the same behaviors. However, capybaras invoke a more ethereal feeling because of their very calm nature and the way they interact with other animal friends.” Adding to the distinction between capybaras and other rodents, Rocco Sennello ‘22 chimed in with his adoration for these coconut-like creatures: “Everything about them is perfect. They’re simply-shaped friends. You don’t even need any artistic skill to draw them, only the love in your heart.” Maybe it’s their hardened behavior that separates them from other rodents, or maybe it’s just their hybrid-like structure, suggests Senello. “They’re also just like an unholy cross between guinea pigs, dogs, and coconuts… without flaw,” Senello said.

Although capybaras exist primarily in the boggy silhouettes of South America, they have acclimated to other climates as well. Located in Īto, Japan, the Izu Shaboten Zoo contains a capybara enclosure, in which capybaras are able to unwind in an orange-diluted bath referred to as a yuzu bath. You may have even encountered the viral videos of capybaras emerging from the depths of a yuzu bath with oranges on their heads. Capybaras aren’t completely foreign to North America, as they’re even held at zoos in the U.S. Zoos like Austin Aquarium in Austin, Texas allow visitors to enter capybara enclosures and interact with them. Ava Baron ‘23, who visited the Austin Aquarium over the summer, recounted after her visit, “I had the pleasure of meeting a capybara named Chunk. I was surprised and delighted to know that for a few dollars, I could go inside Chunk’s enclosure with a staff member and pet him. He was very smart and polite, and sat down with his trainer’s instructions. His fur was very coarse, almost like a broom. Chunk was very gentle and curious and I could hear his quiet capybara chirping sounds while I pet him. It was such a magical experience.” Seeing a video of a capybara online is one thing, but being able to interact with them in real life is a treasured experience.

No longer does the captivating capybara remain an esoteric animal of the southern hemisphere, but rather a globalized treasure whose fame was built off of the internet’s, and Fenwick’s, collective appreciation for such creatures. The modification of capybaras through memes and other comic expressions has allowed for the widespread celebration of these giant rodents. The next time you witness a capybara dunk itself into the zen waters of a yuzu bath, or stand with a solidified expression on its face, just know that this creature has found itself in the hearts of thousands of other people.